Selecting all elements of a cell and moving it will have the effect of moving the cell origin, but it will change as well the location where this cell is referred. With this feature, you can move the origin without changing the resulting design. All references to this adjust will be adjusted correspondingly.

All hierarchy is removed from the current design. So by calling this feature, the current cell is flattened and all other cells are removed. So the design will contain afterward a single cell with shapes and no more cell references.

Any cell not at least containing a single shape is removed. Also, all references to this cell are deleted. This feature will not influence the resulting design.

Two cells of the current design are compared. Any differences between the two cells are marked. There are two methods to mark the differences: 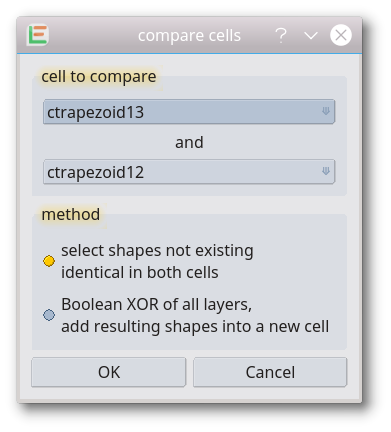